SecuPress 1.3 has arrived! Not with big new killer security features, but we listened our users and decided to merge our free and pro version. Also the delay is explained here.

Minor releases are usually here to patch some bugs or add minor improvements. But launching a new major version is always a big thing.

Also, I did not released any version during the 2 last month, because I didn’t had the possibility to do it before having the website and plugin for me, since SecuPress has left WP Media.

This is the fourth major release and this is the first post talking about the releases, my bad. So, I’ll make a step back and talk a bit about 1.0, 1.1, 1.3.

Let’s talk quickly about the very first attempt to get something for SecuPress. Back in 2013, I already got in mind to develop my own WordPress Security Plugin since I’m a Web Security Consultant and WordPress expert.

So I, as a developer, am not a good designer or UX man, even if I really know UX and know the importance, I think there is so many people who are good at it like Caspar Hubinger since I know him personally.

A picture is worth a thousand words: 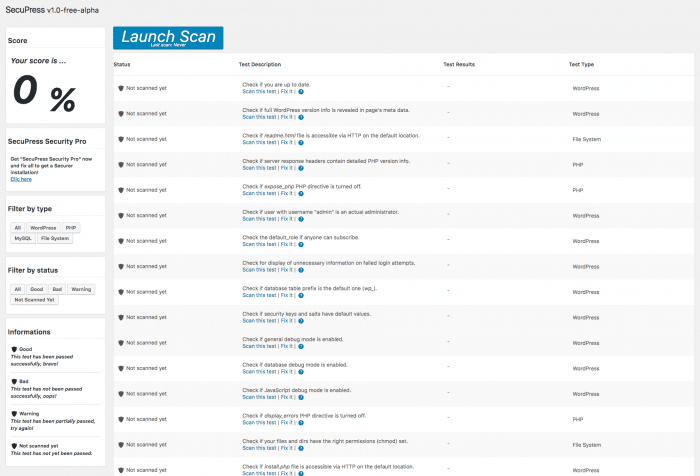 Launched on 23th August 2016, this free version codenamed Mark I was the first official public release on the WordPress repository. An internal beta ran some months before, and no public beta was released.

The design and features were mainly here already, we wanted to launch a plugin already competitive, this is why we spent about 18 months to develop it. 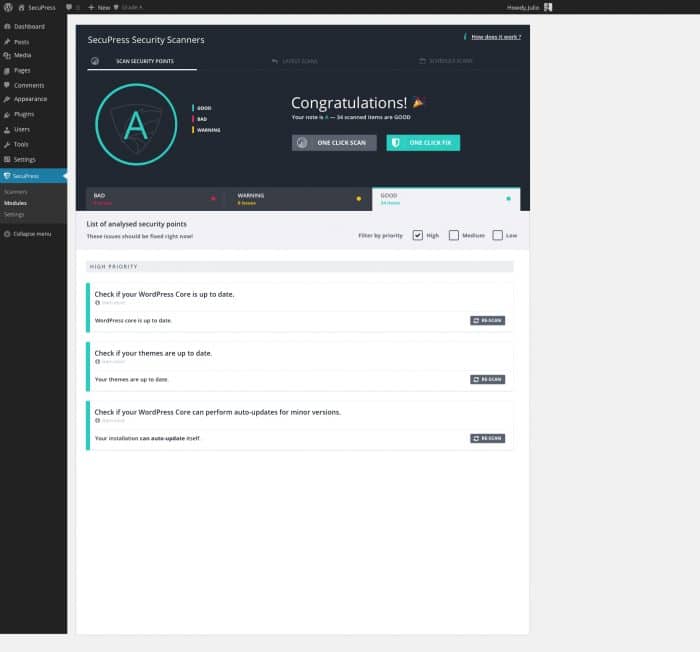 First redesign of the scanner 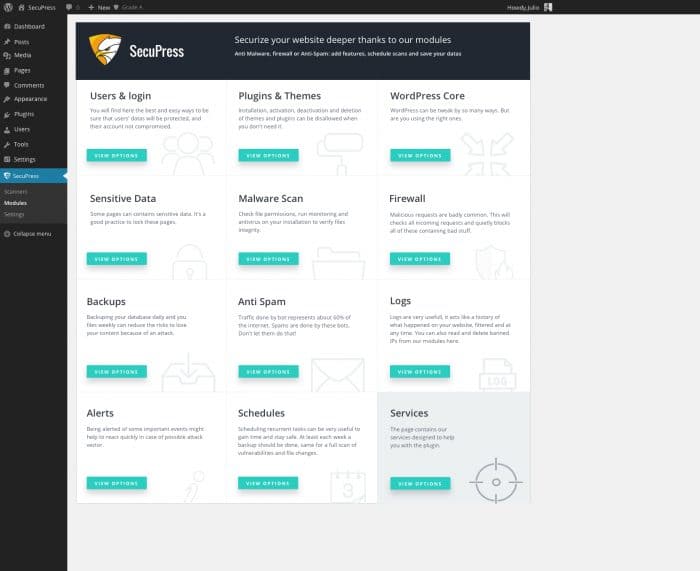 On 10th october, the Pro version was released as 1.0 as well as the free version 1.1. Well, disturbing for you? It was for us too, we decided to bump the pro version at 1.1.

This version — codenamed Stealth — includes the new scanner with 4 steps instead of 1 big step with 100 buttons everywhere.

So, now we have 2 plugins and you need to install the free version if you need to activate the pro version. 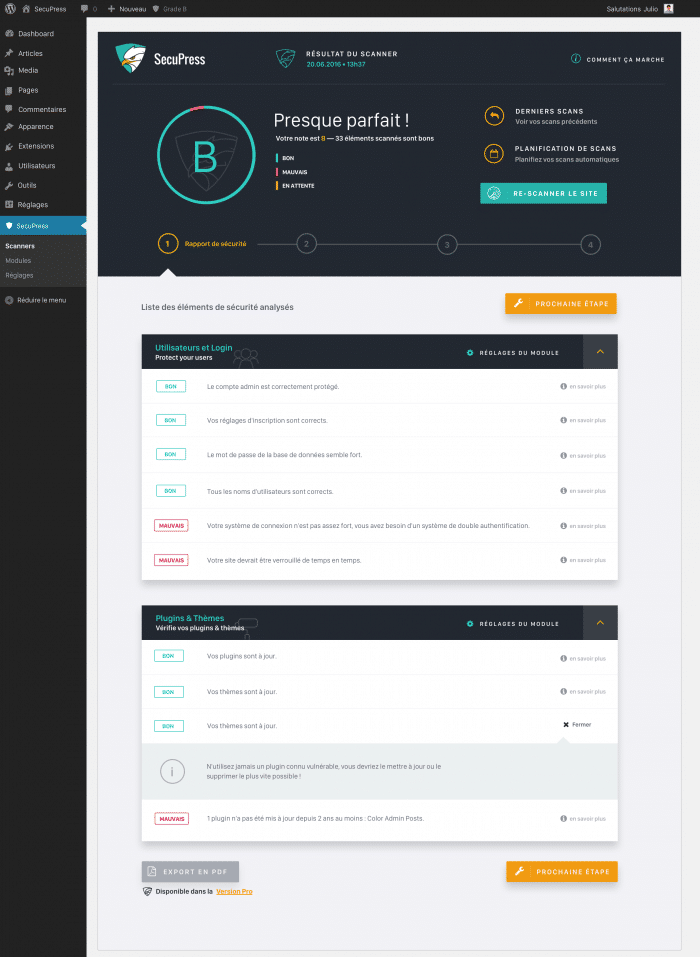 On 21st of december 2016 — my birthday! — we released the 1.2 codenamed Heavy Duty. We transformed 12 scans in an option. At first we were very like “decisions not options” and we activated our modules without the possibility to deactivate them.

Making decisions is not always bad, so, we took the decision to let you have decisions. And the home modules was redesigned too. 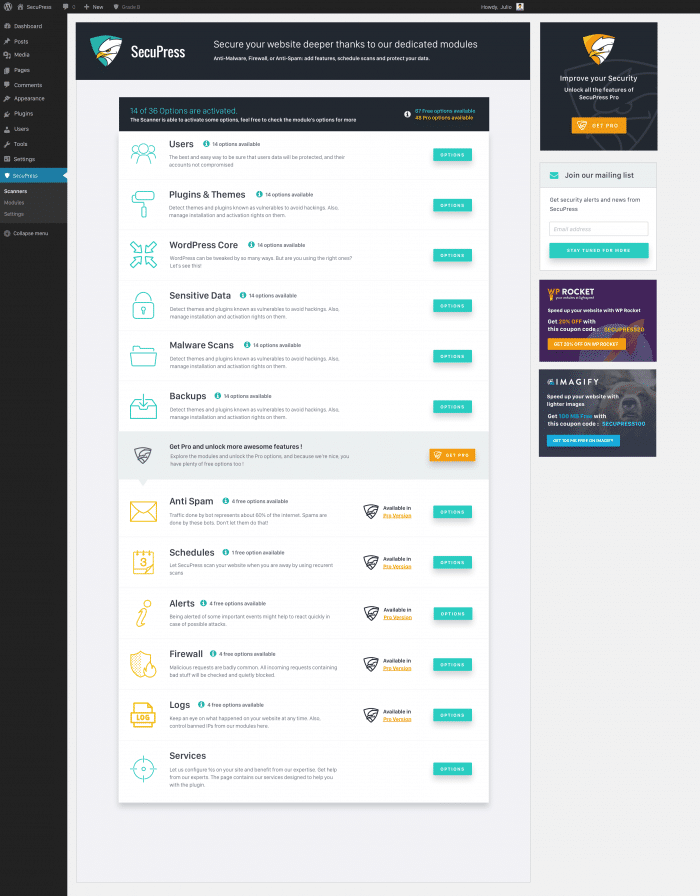 The big change is that, now you have one plugin for the free, but the free is not required anymore if you want the pro.

Even better, by activating your licence key in your free version, this will turn the free into a pro version, priceless.

The whole 1.3 version has been made by Gregory Viguier since I took many other missions as the Lead Product I am at WP Media.

Well, version 1.4, bye. Ok kidding. So yes a 1.4 will contains less things, I mean, really, I’ll remove things to simplify the plugin, prevent you from being locked out, prevent you to be frustrated using SecuPress.

I think removing things or delaying new features is a good thing. It’s like a poker game, when you know you can win, but you have to drop some hands somehow.

Some of you are waiting for a dropbox and other cloud services for the backups. But I won’t do that finally. Why? Because in 1.5 I will drop the development of the backup and include an already existing backup service you may know, follow me on twitter to know more on time.

SecuPress has great days in front of him!